Lovejoy is one of the greatest volleyball dynasties in state history.

I didn't say that, it was the article headline in today's Dallas Morning News. And yes, they won again today! Below is the article.

Can its success be replicated by other area teams?

We take a look at the challenges other state semifinalists face in trying to become the next Lovejoy. 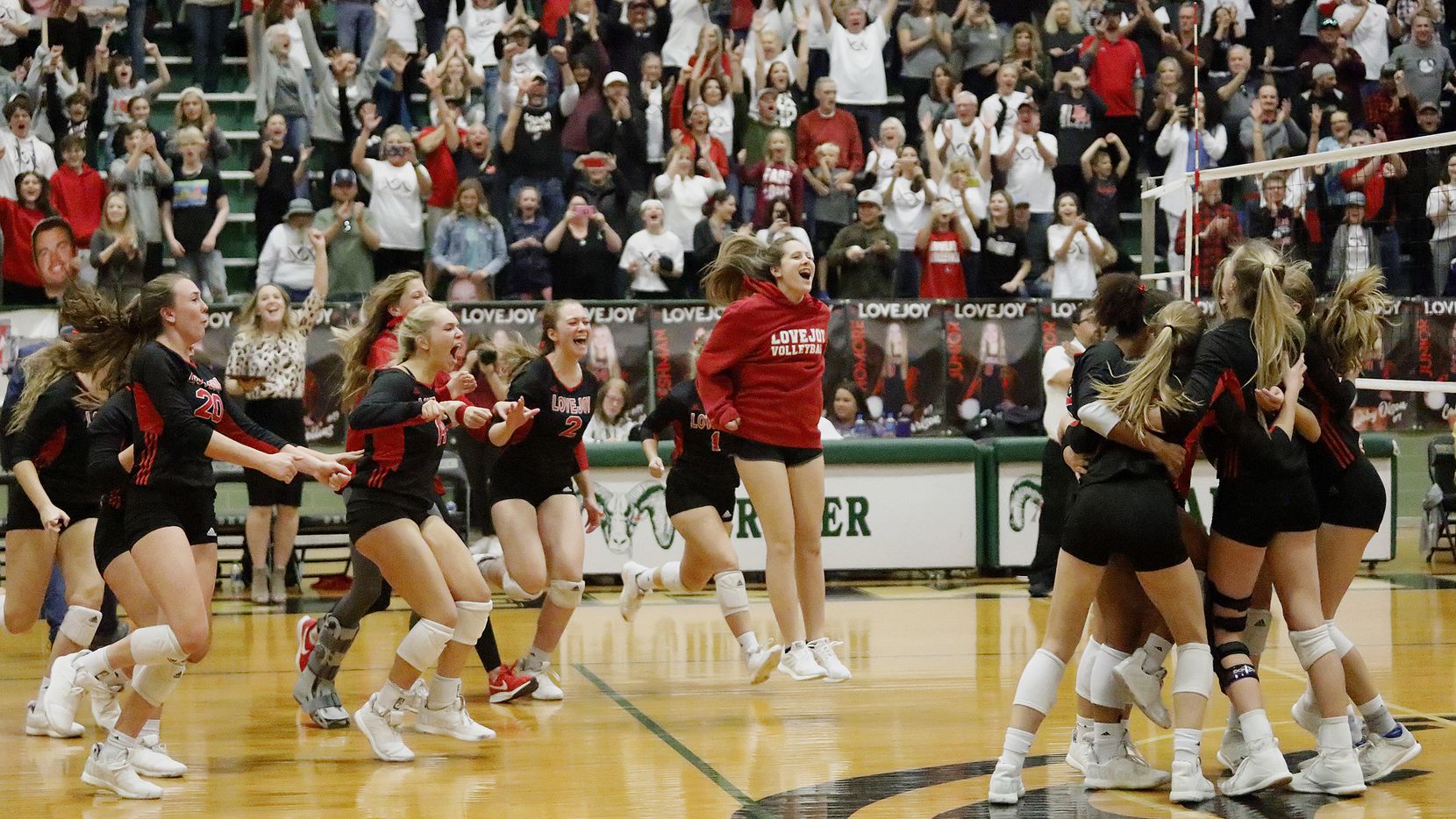 Lovejoy didn’t have any juniors or seniors when it started its first season of varsity volleyball in the fall of 2007. But the Leopards had an entire town behind them. That helped create one of the greatest dynasties in state history.

“We were the first varsity sport in Lovejoy,” coach Ryan Mitchell said. “They didn’t even have a football varsity team at that point, so the community came to volleyball games that year. It was like it was the only show in town, and in a small community, people were anxious to get behind their high school.

“That created a level of success and tradition in the program that still exists.”

In 2008, two years after the school opened, Lovejoy won the first of five consecutive state championships. The Leopards are the only volleyball team in UIL history to win five straight titles in the largest three classifications, but just as impressive is how they have remained a perennial state title contender ever since.

Lovejoy (46-5) will make its 10th state tournament appearance in 12 years Friday when it plays a Class 5A state semifinal against Friendswood (34-17) at 1 p.m. at the Curtis Culwell Center in Garland. Lovejoy has won six state championships — most among Dallas-area teams — and this is the fifth straight year that Lovejoy has won 40 or more matches.

“Winning begets winning,” said Mitchell, who left Lovejoy after the 2013 season but returned as an assistant on last year’s state runner-up team and was elevated back to head coach this year. “Programs that are always at the state tournament, I think it becomes a habit and becomes an expectation in the program, at the school, in the community and with the girls.”

Lovejoy goes to great lengths to get the community involved so that young kids will grow up wanting to play for the school. Current players read with elementary students once a week, they sign posters after matches, and students are let out of school early — it’s an 11 a.m. dismissal this Friday — so they can watch the volleyball team when it plays in the state tournament.

Three other Dallas-area teams — first-time state tournament qualifiers Trophy Club Byron Nelson and Kennedale, as well as Plano West (at state for the third time) — will join Lovejoy at this year’s state tournament. They are trying to establish a tradition like Lovejoy’s, but that is no easy task in talent-rich D-FW, which has had six different schools win state championships in the last seven years.

Just to make it to state, Byron Nelson (48-2) had to make it through the 6A Region I bracket that included defending state champion Flower Mound, five-time state champion Hebron and nationally ranked Denton Guyer. Plano West (39-5) beat nationally ranked The Woodlands and Klein to win the 6A Region II tournament, and Kennedale (37-7) beat the state’s top-ranked 4A team (Farmersville) in the regional semifinals.

It takes high-level talent to build a dynasty, and the four local state semifinalists have a combined 19 players who have signed or committed to play college volleyball. Byron Nelson has a record of 159-29 in the four years that first-team All-American Paige Flickinger (an LSU signee) has been at the school, while UCLA signee Iman Ndiaye and DePaul signee Jill Pressly have led Plano West to the state tournament the last two years.

Ebony Nwanebu transferred to Lovejoy from Irving MacArthur after her freshman year and led Lovejoy to three straight state titles from 2010 to 2012 before becoming an All-American at USC and Texas. Adanna Rollins, a 2018 honorable mention All-American at Minnesota, was the MVP of the 6A state championship matches in 2016 and 2017 after transferring to Hebron from Plano.

This season, Miami signee Noelle Piatas transferred to Plano West from 2018 TAPPS 6A state champion Plano Prestonwood Christian. Piatas, an Under Armour honorable mention All-American, is one of seven Division I recruits on a Plano West team that is ranked No. 32 in the nation by PrepVolleyball.com.

“There is a level of politics that is entering the game with how many move-ins or transfers you have these days,” Plano West coach Justin Waters said. “People are kind of forecasting years down the road where they should move in elementary or middle school, just to join a program at the high school level.”

Lovejoy is located in Lucas, about seven miles from Allen, and the school’s enrollment has grown by nearly 400 students from 2012 to 2018. According to the United States Census Bureau, the median household income in Lucas is $151,188 — compared to $57,051 for the entire state — and that affords most of the 58 girls in the Lovejoy program the opportunity to play club volleyball.

“These developing cities have such strong programs. There is room to move in, it’s still growing,” Waters said. “Plano West, we’re kind of solidified in our housing developments, so I’m not sure if there is going to be future growth or a lot of room for move-ins in the future.”

Lovejoy, Coppell, Argyle and Prosper have combined to win 10 state titles in the last 11 years, and all of them are currently the only high school in their school district (Prosper ISD is opening a second high school next school year). Frisco ISD has 10 high schools but has never had a volleyball state champion, and last week’s national signing day was a prime example of why, as 12 college signees from FISD were split among five high schools.

Byron Nelson had never advanced past the regional semifinals before it hired Brianne Barker-Groth as its coach in March 2018. This season, Byron Nelson is ranked No. 3 in the nation and beat a two-time state champion (Coppell) and the defending state champion (Flower Mound) in the playoffs under the guidance of a coach who has had a hand in two dynasties.

Lovejoy could add another chapter to its storied tradition next year, as it has four Division I recruits who are juniors. Plano West loses four Division I signees but returns Virginia pledge Ashley Le, South Carolina pledge Morgan Carter and Harvard pledge Lindsey Zhang.

And this could be the beginning of something big at Byron Nelson and Kennedale. Byron Nelson will welcome back UCLA pledge Charitie Luper and Wyoming pledge Payton Chamberlain, while Kennedale will return 14 of the 16 players on its roster.